There was pandemonium on Wednesday afternoon after men of the Lagos State police command clashed with commercial motorcyclists popularly known as ‘Okada Riders’ at the state capital, Ikeja.

According to reports, Police officers took to their heels after the Okada riders pursued them along the Lagos-Abeokuta Expressway. 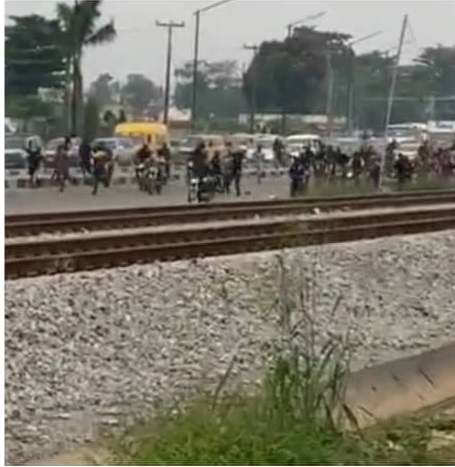 In a viral video, scores of motorcycle riders were seen chasing the security operatives who retreated to their operational vehicles and zoomed off immediately.

This incident comes barely 24 hours after some other motorcycle riders clashed with task force officers in the FESTAC area of the state.

Watch the video from today’s incident below ;

Okada people clashing with Policemen at Ikeja Along less than one hour ago. pic.twitter.com/IkWEHRvkcV

Fashion designer, Yomi Casual, shares adorable photos of his son as he turns one
Sex-for-passport: Nigerian Embassy in Germany suspends official caught pants down in hotel room with a woman (Video)
To Top