For the avoidance of doubt, the Car Brand Mercedes was named after Mercedes Jellinik a German girl that lived in the 19th century.

Mercedes was not the owner of the car manufacturing company nor was her father, but an interesting sequence of events occured that led to her name becoming the name of the most popular car brand in the last 3 centuries.

Mercedes’ father was Emil Jellinik, a German business man with considerable means and a great lover of automobiles.

The car manufacturing industry was still in it’s infancy in those days and many people still preferred Chariots to automobiles.

However Emil Jellinek grew up fascinated with automobiles and his idea of all they could become. He also grew to become an amateur race driver.

In 1896 Emil visited the factory of Daimler motors, one of Germany’s foremost car manufacturers. He bought one of their cars for himself and being a business man he recognized the opportunity for business and was soon selling Daimler cars all over Germany till he became a very valued customer of Daimler motors.

Few years before this in 1889 Emil’s wife gave birth to his first daughter, Mercedes. Emil had a firm and almost superstitious conviction that his daughter brought him good luck and he treated her specially.

Fast forward to 1896, Emil started engaging in his hobby of car racing more seriously with the car he had bought from Daimler motors.

In 1899 when his daughter was only 10 years old, he participated in the NICE race (a prestigious German car race event at the time) with his car and with the race name “Mercedes”. He believed that her name would bring him good luck.

It is uncertain whether Emile won that race or not, but so impressive was his performance that he won many plaudits and was able to sell over 30 cars in the next year (This was a huge deal at the time).

Having gathered reasonable coout with Daimler motors, Emil started pushing them to build lighter and faster cars. He had a need for speed in raced and transport and needed people to see the value of cars.

In Emil’s words, “If I cannot get anything better from a car than a horse and chariot, I might as well stick with the horse”

In addition to his many letters to Daimler motors, he promised to buy 36 of their new cars on one condition, that they would name it “Mercedes” after his daughter who was only 11 at the time.

In 1901, Daimler launched their first race car, Mercedes 35HP(horse power) and this was the very first car that bore the little girl’s name, making her extremely popular at the time.

Mercedes cars soon starter dominating all NICE races in the region prompting the newspapers to describe that Era as “The Mercedes Era”.

Emil began selling Mercedes Cars all over the world through agents amassing a decent fortune with it. His daughters name had indeed brought him good luck and wealth after all!

Mercedes became the fastest selling car in the world and till today is one of the best selling ever.

However all of this good fortune was about to crumble with the inception of the first world war.

Emil was acussed of Spying and all his properties were seized which plummeted him and his affluent family into poverty. In 1918 Emil died leaving Mercedes fatherless and missing her loving father.

Mercedes story went down hill from there. She got married twice and both failed leaving her with two kids and broke. She had to beg neighbours to be able to feed her kids.

Her first husband had been forced to work in civil service before their divorce and the second husband had passed away shortly after their wedding.

In 1929 10 years after her father died, Mercedes too died from bone cancer after years of battling the ailment. She was just 39 years old.

Daimler Motors on the there hand later merger with Karl Benz’s company and their new cars were called Mercedes-Benz. A fusion of Mercedes name and Karl Benz’s name 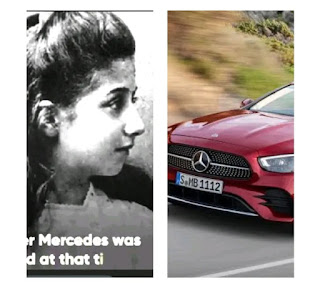 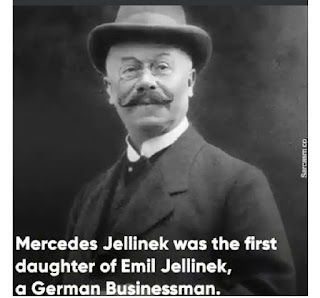 Emil Jellinek’s name might have disappeared from history as his daughter might have had it rough, but at least her name lives on in one of the most luxurious and covered cars of the last three centuries, THE MERCEDES-BENZ!

You can watch the entire story recap here

What do you think about this true life story? Share your thoughts in the comment section below.